I will give you shepherds after my own heart, who will feed you with knowledge and understanding.  – Jer 3:15

As I was studying Jeremiah 3 this past week, the Lord brought verse 15 to the forefront of my thoughts. In the midst of calling His people to repent, He says that if they will return to Him, He will send them shepherds after His own heart; shepherds who will feed them with knowledge and understanding. This immediately reminds us of the Good Shepherd of John 10 who lays His life down for His sheep, calls them by name, and how they follow Him. My heart resonates with the challenge before each of us to emulate our Savior: to tend to His flock, providing knowledge and understanding of the One who laid down His life for us! Thank you so much for joining in with us as we work to reach the deaf of Africa! 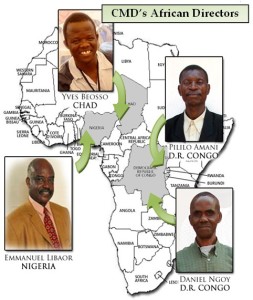 I want to use this issue of Deaf Witness to provide an overview of CMD’s current deployment, and lay out the strategies we want to pursue over the next few years. Although God has used CMD over the past sixty years to open dozens of schools and churches for the deaf across west and central Africa, these days, our focus is aimed primarily at four countries: Burundi, Chad, Democratic Republic of Congo and Nigeria. Through schools, camps and pastoral training classes, we aim to equip the deaf in establishing schools and churches across their countries and beyond.

Population: 11.5M
Estimated deaf: 11,500
With a new school added just a few months ago, there are now a total of thirteen schools for the deaf across the southern portions of Chad. There are none in the Muslim north. All but one of the schools are directly related to the original three schools started by CMD many years ago. Financial constraints prevent us from actively supporting more than our center in N’Djamena, the country’s capital, so the remaining schools support themselves as best they can. Six schools form the evangelical backbone of deaf ministry in Chad, with our school in N’Djamena as the epicenter. Led by Yves Beosso, the center serves as a deaf church, a community outreach center, and a school for about 55 students (including several boarding students from the north). The center is made of mostly mud-brick. Several rooms are crumbling and in dire need of reconstruction before the rainy season hits in a few months.

We’re thankful to have received a sizable land grant from the government, but if we don’t build a permanent structure on it soon, we risk losing it should the government find another use for the land.

During the Easter break, Brother Beosso organizes a nation-wide Easter camp for the deaf, alternating locations with the other five evangelical schools. Typical attendance at the camp is around 150 people.

Population: 67.7M
Estimated deaf: 67,700
Regional population: 450,000
Estimated deaf: 450
Located in the southern portion of the DR Congo, this school offers both primary and secondary education for the deaf. Daniel Ngoy has been the school’s director since the school’s inception in 1985. The school serves 85 students, 50 of whom are in grades 1-6. Oversight is provided by the local assembly in Likasi, and the elders are glad to share property and resources with the school. World Vision has helped with a much needed expansion, allowing them to build new classrooms for high school students. Because the government pays meager teacher salaries, and parents are reluctant to spend money to educate deaf children, deaf teachers are subjected to huge salary discrepancies when compared to teachers at hearing schools.

When the deaf graduate from our school in Likasi, many of them move two hours south to Lubumbashi, the capital of the province, where jobs and resources for the deaf are more plentiful. The deaf schools and churches in Lubumbashi have been operating independently of CMD for many years now, but we would like to expand our ministry and pastoral training efforts in both Likasi and Lubumbashi.

PRAY FOR… Faithful teachers despite financial strain. Strong spiritual leaders to carry on the work in Likasi.

Population: 67.7M
Estimated deaf: 67,700
Regional population: 378,000
Estimated deaf: 378
Located on the eastern border of the DR Congo, the school in Uvira is one of the newest schools opened by CMD. Pililo Amani has been the director these past eleven years, and his love and enthusiasm for the deaf is infectious. Because the city does not have a large presence of healthy evangelical churches, the deaf in Uvira have very few options for spiritual resources and growth. My wife and I, along with missionaries Tom and Kathy Lindquist and their daughter Renee, lead an annual Bible camp which draws deaf participants from the region, including the neighboring countries of Rwanda and Burundi.

We’re trying to supplement Uvira’s academic and spiritual vitality by collaborating with the school for the deaf in Bujumbura, Burundi, a short 45 minutes across the border to the east. The deaf school in Burundi, located in the mission center managed by CMML missionaries Jesse and Joy Johnson, has been operating independently of CMD for many years now, and the growth there has been nothing short of stellar! My wife and I had the opportunity to visit with the Johnsons when we were in Bujumbura last year, and were truly thrilled to see how God has been using their multi-faceted ministry to impact Burundi.

PRAY FOR… Spiritual resources and leaders. Important decisions about the secondary school. Improved relations with the deaf ministry in Burundi.

Population: 162M
Estimated deaf: 162,000
Regional population: 1.3M
Estimated deaf: 1,300
Since the mid-60’s, the center in Ibadan has been CMD’s center of operations in Africa (and our home when we lived overseas). Now led by Brother Emmanuel Ilabor, the center has grown tremendously, serving over 200 primary and secondary deaf students, many of whom are boarding students. The facility has expanded well beyond capacity, but plans for new construction are on hold due to lack of funds.

During the summer, the center hosts a deaf leadership/training conference, attracting deaf and hearing leaders from all parts of Africa. As a result of the strong spiritual leadership, there are over 25 churches for the deaf all across the country.

Each spring, 700-800 deaf people convene at one of seven locations for an annual Easter Camp. Lord Willing, I’ll be returning to Ibadan, the city I was born in and haven’t been in since 1976. I’ll be helping with teaching for the Easter Camp near Ibadan. I’ll also get a chance to put my computer networking skills to use (my “tent-making” vocation here in the States) by upgrading their aging computers, network and Internet service.

PRAY FOR… Continued spiritual growth. Boldness for those living in the Muslim-controlled north. Funds for expansion. Travel as I head to Ibadan in March.

Indeed, your continued prayers are coveted.